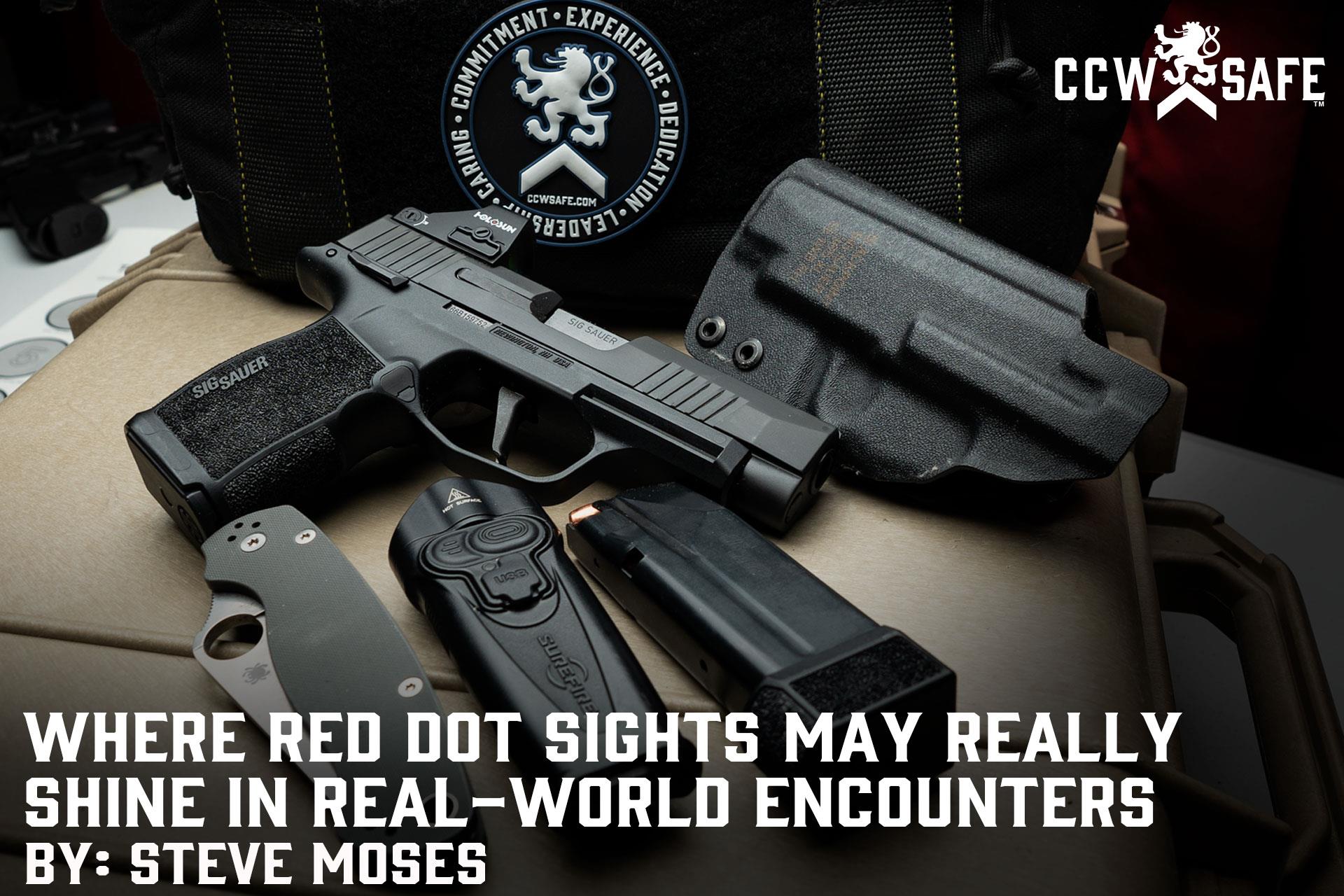 Posted on April 11, 2022 by Steven Moses in Uncategorized

WHERE RED DOT SIGHTS MAY REALLY SHINE IN REAL-WORLD ENCOUNTERS

I would estimate that there were over four hundred attendees, and while I do not know how many of them were running pistols with red dot sights, I might venture a guess of fifty percent or more. I do know that a few shooters had issues with the red dot sights on their pistols, and that many (if not most) of the top shooters that competed in the Polite Society and Man Vs. Man matches had red sights on their handguns. Nothing I observed there would cause me to think that a red dot sight would increase or decrease my chances of surviving a typical lethal force encounter such as a mugging, armed robbery, home invasion, or sexual assault.

Having said that, I am aware of several situations in which a red dot sight on my handgun could be of significant value, and that is anytime I am in a low-light area in close proximity to groups of other persons. A person with normal eyesight simply sees more poorly in dim light than they do in good light. Diminished resolution affects our ability to see details. LASIK surgery is further believed to negatively impact low-light vision (my own experience mirrors this). I have seen research that claimed that a person with 20/20 visual acuity may experience 20/100 vision in conditions described as “low luminance-low contrast.”

As stated before, I am of the opinion that I can get by just fine with iron sights even though my vision without correctives lens is less than perfect most of the time, and that in some circumstances iron sights may be the better choice. They do not fog up, batteries do not die, and they are less susceptible to breakage. Where a good quality, properly maintained red dot sight has the edge is going to be in dimly lit enclosed environments or certain open environments that contain multiple persons in close proximity to each other. Scenarios that come to mind are fireworks shows, movie theaters, upscale restaurants, and churches that frequently incorporate videos in their services.

One of the blessings (or curses, according to my wife) of being a long-time defensive firearms trainer, former deputy, and church security team instructor is that I tend to do a quick security assessment anytime that we enter a business, restaurant, movie theater, or church. One of my concerns is that if we are not able to immediately exit the premises and I need to use my handgun people will likely be hurriedly moving about in all directions and I may not be able to see my front sight. If this should occur I would much rather have a handgun with a red dot sight than one with traditional iron sights.

I am a bit of a minimalist, and would rather spend money on training than I would on the latest and greatest gear. To be honest, the majority of the time I carry an Airweight .38 Special snub nose revolver, a small knife, pepper spray, a tourniquet, chest seal, and QuikClot gauze. Other times I carry an iron-sighted Glock 48. However, anytime that I know that I am going to be around others during either the evening hours or inside a dimly lit structure I default to either a Glock 43X or 19 with a Holosun red dot sight. I am unable to imagine what it might feel like to injure or kill an innocent third party while defending myself or my family. I could probably go on and on about having to deal with an almost certain civil lawsuit, etc., but just having to live with the knowledge that my actions may seriously injure or take the life of an innocent person whose loved ones will also be impacted is enough to cause me to take advantage of any tool that allows me to better align the muzzle of my pistol in a low luminance-low contrast environment.