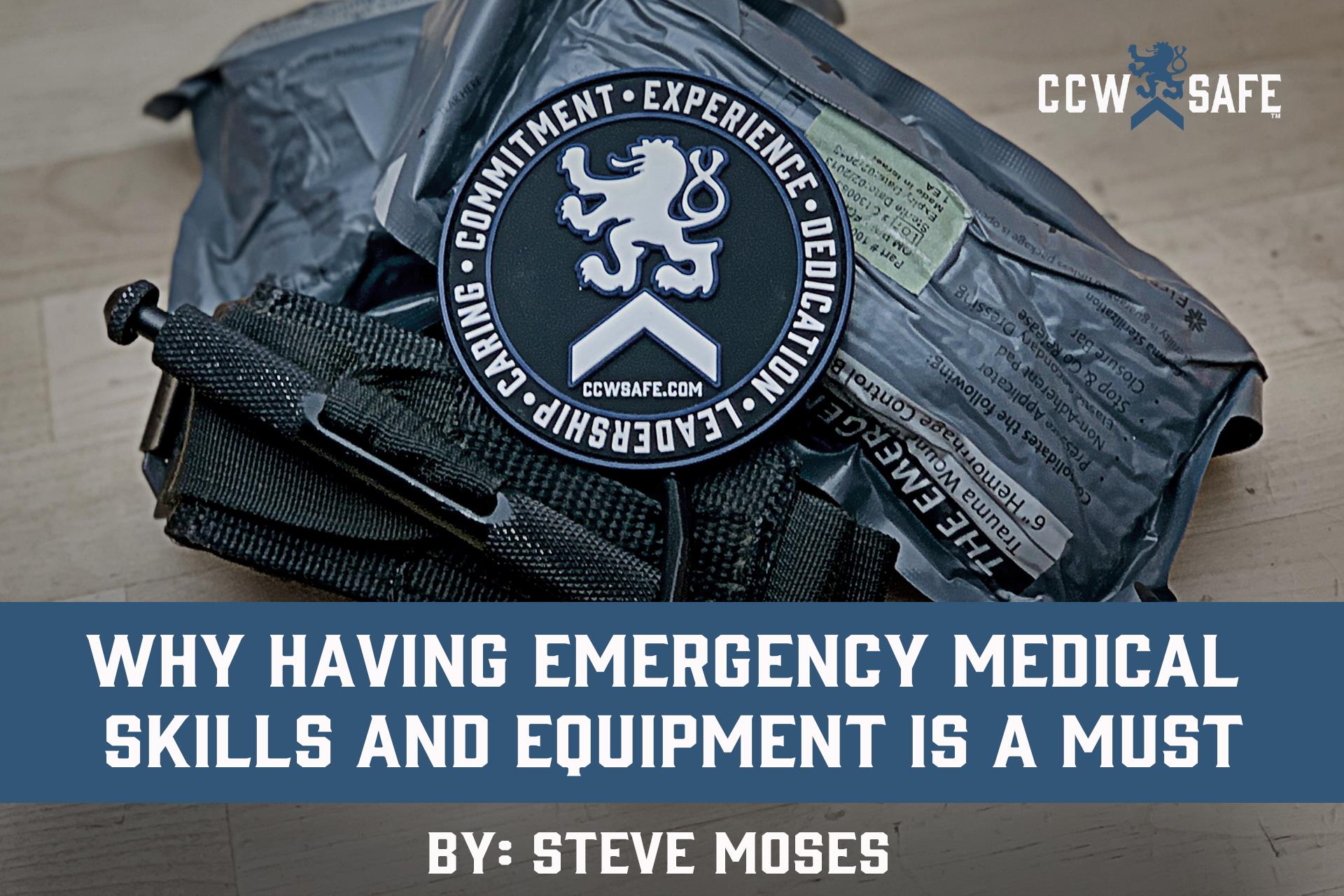 Posted on November 2, 2020 by Steven Moses in Training

WHY HAVING EMERGENCY MEDICAL SKILLS AND EQUIPMENT IS A MUST

WHY HAVING EMERGENCY MEDICAL SKILLS AND EQUIPMENT IS A MUST

Every year I try to write an article on the importance of basic emergency medical skills for concealed carriers. My goal is not only to reach out to persons who recently started carrying a concealed handgun for their protection but also as a friendly reminder to more experienced concealed carriers who perhaps haven’t given much recent thought to maintaining important emergency medical skills and whose medical equipment may need replacing or updating.

It is my opinion that the chances are unusually high in 2020 that a concealed carrier may find him or herself in need of immediate medical attention due to the criminal actions of other persons. Up until now, I viewed the most likely cause of a violent action directed towards me to be based upon immediate financial gain (armed robbery) or a perception that I had angered another with my driving (road rage). I now must add to the list the threat of being physically assaulted by strangers for the simple reason that I was in the wrong place at the wrong time.

Caleb Causey of Lone Star Medics (www.lonestarmedics.com) and Troy Miller are two of the subject matter experts on my short list of go-to experts in order to find out about emergency medical skills for concealed carriers. Caleb is a former army combat medic who possesses over 20 years of experience in field and tactical medicine who has also spent time in the roles of volunteer firefighter/EMT and SWAT team tactical medic. Causey is an excellent trainer and a regular presenter at the annual Rangemaster Tactical Conferences.

Troy Miller is a former Emergency Room physician and former SWAT team tactical medic as well as a Rangemaster-certified Master Handgun Instructor and Defensive Shotgun Instructor. In other words, these guys spend a lot of time in the field and know full-well the varieties of serious or life-threatening injuries that a concealed carrier (or persons in their company) may sustain during a violent criminal assault.

For the purposes of this article, I am focusing primarily on penetrating wounds, including those caused by bullets, knives, and other cutting instruments. While it causes me no little concern seeing video footage of  persons being kicked and stomped on the head or battered with rocks or bricks, in many instances the best thing that the concealed carrier can do is address head wounds, stabilize broken limbs, and protect that person long enough to see that they receive professional medical attention as soon as possible. On the other hand, there are often actions that concealed carriers can take using appropriate medical equipment that can make the difference between life and death in regard to dealing with blood loss or compromised breathing.

Circulation, Airway, and Breathing are to be addressed in that order. An injured person can survive for several minutes without oxygen and not suffer permanent damage, but once blood leaves the human body it cannot be put back in.  Without immediate treatment, blood loss resulting from damage to any of the various arteries in the human body is life-threatening.  This is also true when it comes to penetrating wounds to the arms and legs. The speed at which an injured party can bleed out and perish when shot in the arms and legs is frightening. The concealed carrier can control arterial bleeding from the limbs through the use of a proper tourniquet. If use of a tourniquet is not possible, he or she can also pack the wound with QuickClot gauze. This might occur even if the wound is on the leg or arm but located so high that the tourniquet is unable to bring sufficient pressure to bear on the damaged artery.

Penetrating wounds to the torso that strike a lung can cause a pneumothorax (sucking chest wound) or tension pneumothorax (air escapes the lung but remains inside the chest cavity).    A proper chest seal can be applied to a pneumothorax in order to buy precious time before medical attention can be obtained. A tension pneumothorax can also be caused by a broken rib impaling the lung as the result of a beating. Concealed carriers are encouraged to do some careful research on using a heavy-gauge needle in order to vent air that has built up in the chest cavity. I am aware of some controversy regarding untrained persons using this technique because of the risk of further injuring the already injured party. I will go so far as to say that I think concealed carriers might benefit from hearing from both sides before making a decision as whether it they would want to learn how to use it to treat a tension pneumothorax or not.

Based upon my training under both Causey and Miller, I am a believer that the concealed carrier should have on their person when outside the home both QuickClot Gauze and a CAT tourniquet or Soft-T Wide tourniquet. Additional equipment that could prove useful are a Beacon Chest Seal or Russell Chest Seal and a cutting tool that was expressly designed to cut through clothes in order to expose wounds. Caleb has pointed out that this equipment may not be enough to address multiple wounds suffered by the concealed carrier. It is definitely not enough if the concealed carrier is in the company of other family members or friends.

Both Caleb and Troy recommend that concealed carriers maintain a bag capable of treating all members of their family in both their vehicle and home. I absolutely agree. This is especially true today as people are finding out in certain areas that during times of civil unrest law enforcement and ambulance response times can range from slow to never.

It is unfortunate that most articles written that are addressed to concealed carriers have a certain doom-and-gloom flavor. I do not think that this has to be the case. If anything, I feel lucky.  I am more prepared to deal with a life-changing event than probably ninety percent of the persons that I am around on an everyday basis, and I am a firm believer that preparedness and luck go hand-in-hand.