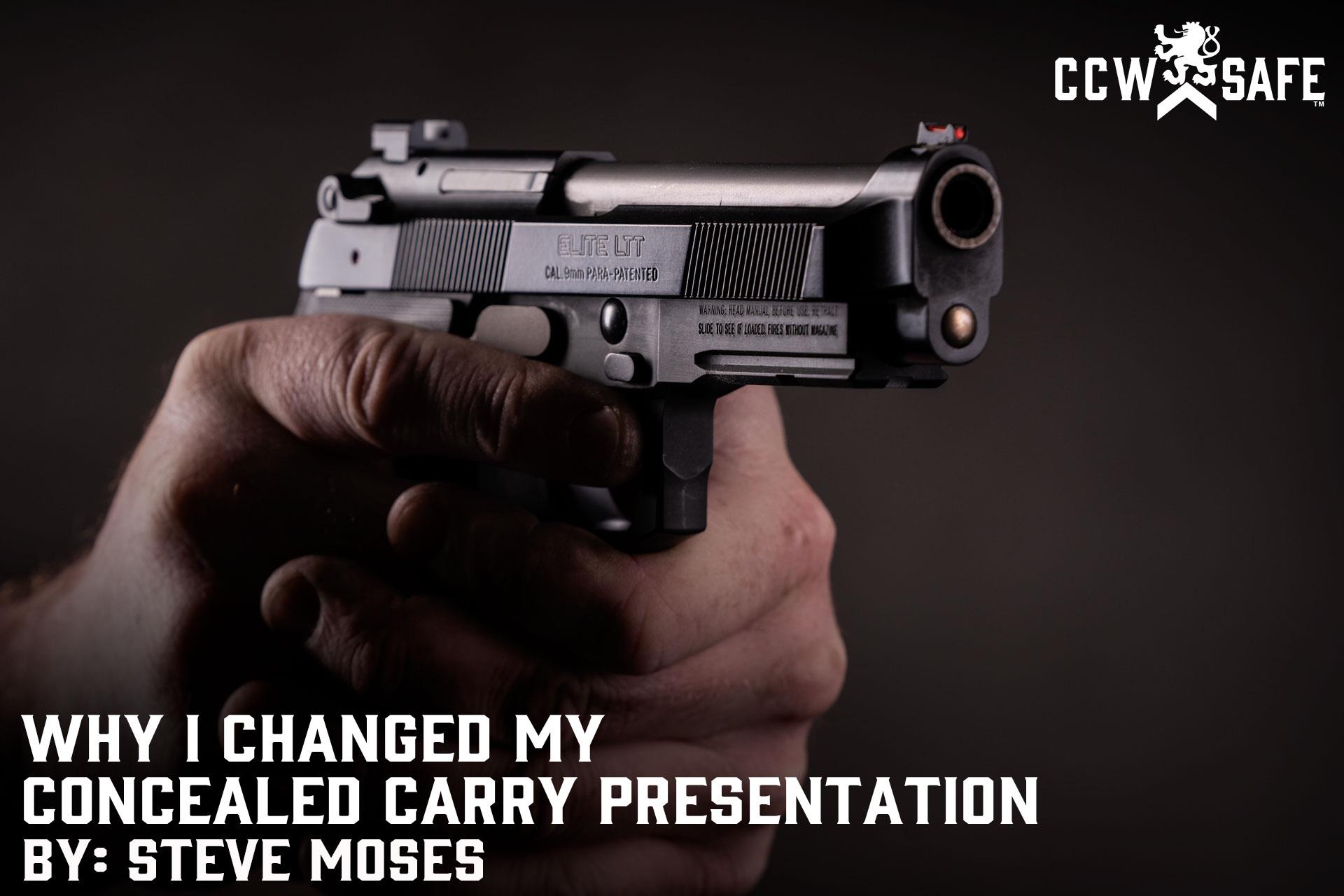 Posted on February 28, 2022 by Steven Moses in Uncategorized

WHY I CHANGED MY CONCEALED CARRY PRESENTATION

On November 18, 2021, I had surgery on my left wrist to address major damage caused by an old martial arts injury followed by a decade of osteoarthritis. The most conservative repair was deemed a surgery called proximal row carpectomy, or the complete removal of the three bones in my wrist closest to the ulna and radius (forearm) bones. As I write this, I am halfway through the anticipated sixteen-week recovery period and still limited to lifting nothing heavier than five pounds with my left hand. For nearly two weeks my wrist and hand were wrapped in a dressing and my left hand was extremely swollen, painful, and I was unable to use my fingers. I still wear a rigid splint when doing chores or anytime I leave the house.

I will go as far as to say that when it comes to running a handgun that I am what is sometimes referred to as an “Unconscious Competent.” That is, when shooting an action pistol match, difficult drill, or dealing with a potential threat I can put 100% of my focus on dealing with the challenge at hand without having to concentrate at all on drawing my handgun from concealment and then shooting my handgun and making good hits at acceptable speed. This is because of the amount of time I have spent getting in good practice repetitions over the years. I had also trained and did practice from time to time using my concealed carry handgun with just my dominant hand, but by no means can I do it at the same level of competence when using both hands. In other words, I have become a “Conscious Competent” when it comes to using my dominant hand only. This means that I may not be able to direct my full attention to dealing with a problem if necessary because I may need to also focus on drawing my handgun from concealment with my dominant hand only or risk the chance of fumbling my draw during an event in which seconds truly do matter. One possibility includes attempting to clear my covering garment with my support hand without realizing that it is not functional, and then wasting precious time transitioning to the other hand and then fumbling it also.

In order to achieve a fast presentation from the holster the majority of advanced shooters wearing a closed covering garment will clear it with their support hand. It makes sense that the fewer movements that must be made between the initiation of the action to the actual pressing of the trigger as well as number of movements performed at the same time will cut down on the time. I was one of those shooters for the simple reason that I believed (and still do) that the ability to quickly draw from concealment and get the muzzle of my handgun between myself and a deadly threat is a critical concealed carry skill.

However, Tom Givens has been teaching his students to use both hands to clear a closed garment for years and he is very quick. My initial take on this method was this was because Tom carries his handgun on his hip, which means that using two hands ensures that the garment is lifted higher when grasped and reduces the chances the handgun will get snagged while being drawn from the holster. Most shooters carrying from the Appendix position well forward of the hip use their support hand only for the simple reason that both hands are typically not necessary to clear the garment and they can get their dominant hand on the grip faster. What I did not realize was that another reason that Tom teaches this method of drawing from the holster is because of the built-in redundancy. If the shooter fumbles the initial grip with one hand the other almost always succeeds. The end result is that while the presentation may be 2/10ths of a second slower it is almost always going to result in a successful initial presentation.

What this means to me is that by using two hands to clear the garment and making that my default draw I am much more likely to achieve “Unconscious Competence” status using my dominant hand only to clear my closed covering garment and establishing a good firing grip at a high rate of speed. Another plus for adopting this method as my default draw is that it also works better for me on the rare occasions that I hip carry under a closed garment.

I have been using this two-handed garment clearing method for about a month now and have had several live-fire practice sessions in which I am getting good hits with my Glock 43X at five yards in around 1.6 to 1.75 seconds using my dominant hand only, which is relatively decent for an old Boomer (also known as Baby Boomer because I was born during the early post-World War II era). More importantly, I engage in frequent short duration dry practice in which I incorporate the revised draw. I find making this slight change to my draw stroke unusually easy as all I have to do is just add grabbing the hem of my covering garment with my right hand and everything that follows that is both natural and easy.

Articles like this one tend to generate controversy in the firearms training community. I am clearly setting out above a personal preference for a technique of clearing the cover garment that involves a trade-off of speed for what I think is a reduced chance of a fumbled draw, most especially when use of the support hand is compromised.