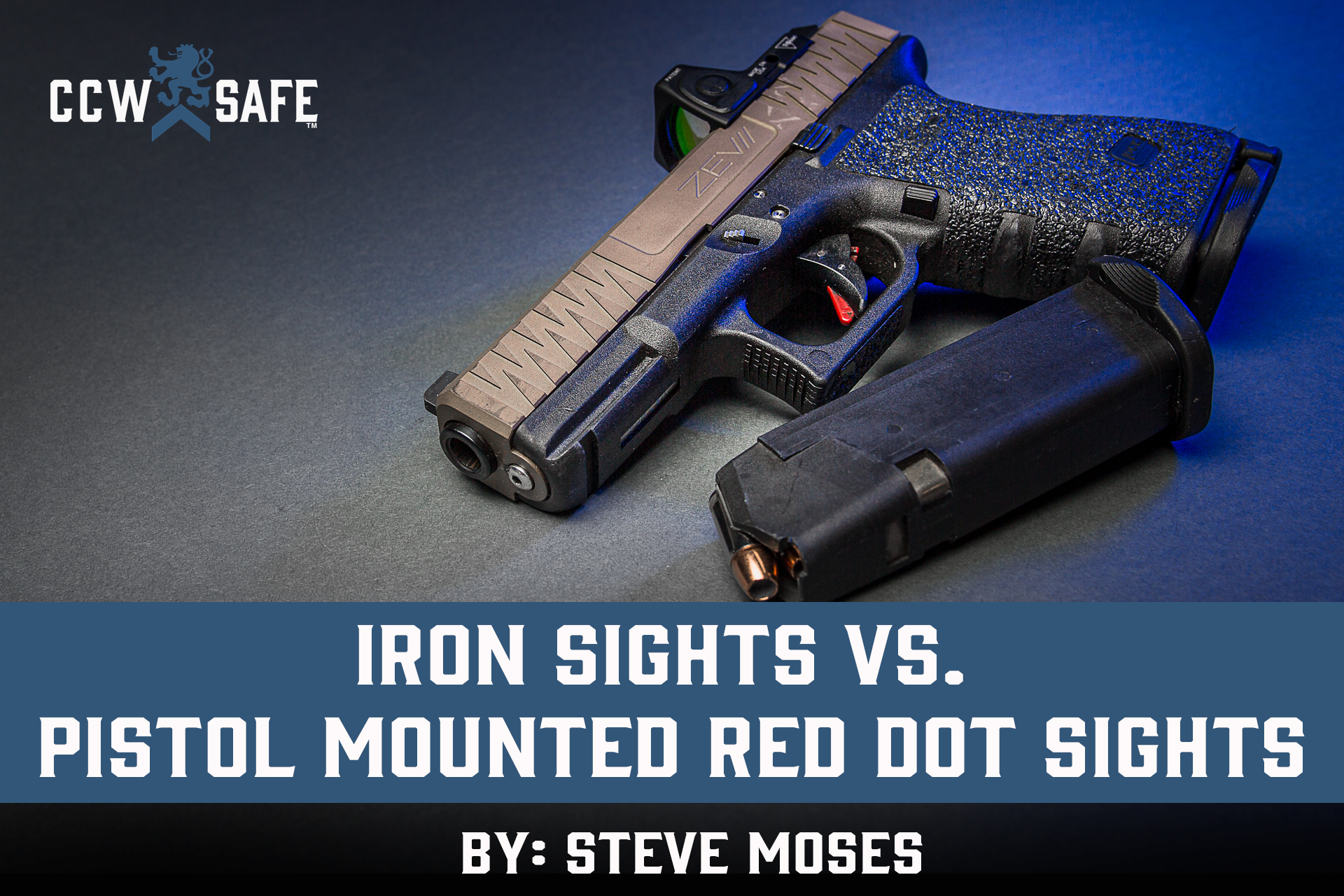 Posted on August 5, 2019 by support@ccwsafe.com in Training

Although it may be considered bad form for a writer to state his conclusions on a subject at the beginning of an article, I choose to say a few things right up front. I do not own a Pistol Mounted Red Dot Sight (PMRDS), have not subjected a PMRDS to any meaningful testing whatsoever and have no intention at this time to purchase a PMRDS. I am also not opposed to the use of the PMRDS by concealed carriers.

The Significance of Close Range

For the most part, violent criminals dictate the distance at which a typical concealed carrier can expect to fire his or her handgun in self-defense. According to information provided to students of respected Rangemaster firearms trainer Tom Givens during his outstanding three-day firearms Instructor Development Course, the average distances between an armed criminal attacker and his or her intended (and armed) victim involving gunfire are as follows:

To put this into perspective, an average car is about 16 feet long. In my opinion, the PMRDS offers no meaningful advantage over iron sights (assuming a highly visible iron front sight like the Ameriglo Pro-Glo tritium front sight with orange or green outlines) at these distances for most shooters, even those who struggle with presbyopia (farsightedness).

Furthermore, the PMRDS may very well put the poorly trained concealed carrier at a disadvantage simply because they have not invested the time to learn some of the nuances of properly aligning the PMRDS rapidly. They may thus find themselves unable to locate the dot and then position it on their attacker under extreme stress.

Frankly, I was not willing to conduct a comparison test by investing money into either milling the slide of my Gen 5 Glock 19, or buy an aftermarket slide already set up for a PMRDS, much less spend the kind of coin it would take to purchase a quality electronic red dot sight like the Trijicon RMR. However, I was most willing to call my longtime friend Hany Mahmoud and coerce him into testing my theories using his time, guns and ammunition.

Hany is a firearms instructor at the Tarrant County College Police Academy in Fort Worth, Texas. He has a Master’s degree in criminal justice and is well-known for his law enforcement and private-sector teaching abilities, as well as his outstanding shooting skills (as evidenced by his third place overall win in the 2019 Tactical Conference competition in a division that included shooters such as Wayne Dobbs, Gabe White, Spencer Keepers and Massad Ayoob). Hany has been a Texas peace officer for 20 years and has served in various capacities, including chief deputy, firearms training officer and commander of a multi-precinct Special Response Team in one of the most populated counties in Texas.

As a full-time firearms instructor, Hany shoots thousands upon thousands of handgun rounds every year, and he is no one-trick pony wedded to a specific type of handgun or sighting system. I asked him to shoot two nearly identical Glock 17s side-by-side, specifying that they both have similar triggers and identical ammunition. The sole major difference between the two handguns is that one has iron sights, and the other a PMRDS (in this case, a Trijicon RMR). I even went so far as to specify the tests, which were as follows:

Hany and I agreed in advance that this would not be an exhaustive test, i.e. one in which he would shoot the drills multiple times so we could get an average of scores, in order to conclude which sighting system was superior. I told Hany that I wanted to know the following:

Hany said he felt he had performed close to the best of his ability on all four stages, with no called flyers or bobbles. He then commented that these tests simply confirmed what he had already come to believe. At short distances, there was no advantage to the PMRDS, and it was slightly harder for him to track while shooting at high speed. At the longer distances, there was a decided advantage in favor of the PMRDS. He emphasized that it was significantly easier to make slight sight corrections just prior to pressing the trigger with the dot than with the iron sights.

Conclusions on the PMRDS for Concealed Carriers

My thoughts on the PMRDS for concealed carriers? With the excellent features of some of the new PMRDS models coming out – like the Trijicon SRO and Aimpoint ACRO – I believe there will soon be something for everyone. Though it’s my opinion that concealed carriers should think long and hard about proactively engaging an active shooter in public, the distances at which such an encounter is more likely to take place favor the use of the PMRDS.

It should be noted that there is a distinct learning curve for using a PMRDS. Even experienced shooters often find themselves searching for the red dot when they bring the pistol up to the shooting plane (a more-or-less imaginary straight line between the eye and the desired target).

I recently picked up my business partner’s Glock 19 bearing a Trijicon RMR and shot the Five-Yard Roundup drill, created by Justin Dyal, retired USMC. In this drill, all shooting takes place at five yards, and each stage is shot within 2.5 seconds. The target is the repair center of a B8 bullseye utilized for 25-yard timed and rapid fire. I found myself outside my comfort zone on some of the rapid-fire stages. Advocates of the PMRDS might correctly point out that I lack formal training with that sighting system, which is exactly my point. Concealed carriers who are unable or unwilling to invest in formal training and follow this up with regular practice are likely to experience the same thing as I did.

I think it is entirely up to the concealed carrier to decide whether iron sights or the PMRDS is right for them. One huge positive which favors the PMRDS is that it may be the only way to go for some concealed carriers who have significant vision issues. At the risk of being redundant, I strongly feel that at the distances most deadly force encounters occur, using a PMRDS requires significant practice before it can be used as effectively as highly visible iron sights. Most concealed carriers who want to go this route are best advised to receive training under a qualified instructor.