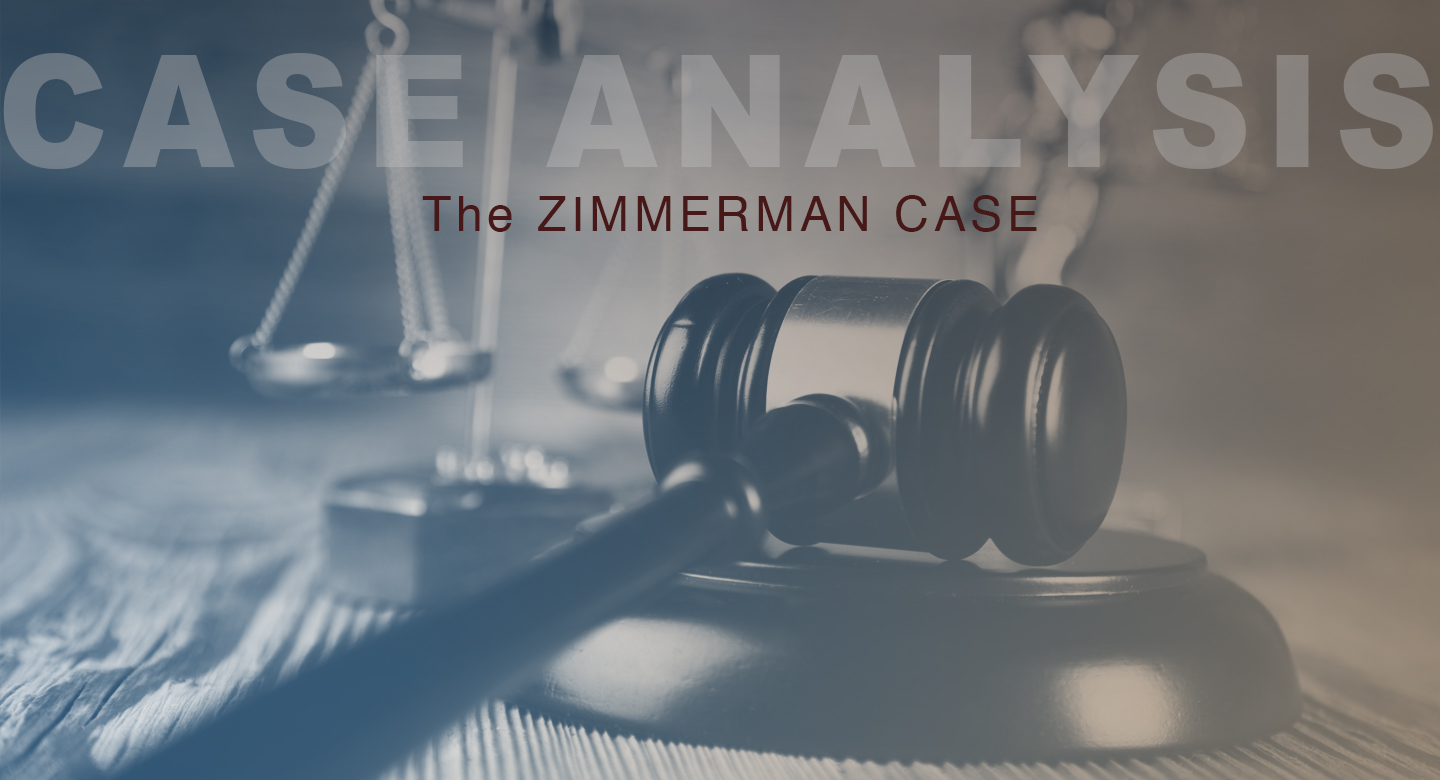 Posted on November 16, 2017 by support@ccwsafe.com in Case Analysis

LESSONS FROM THE GEORGE ZIMMERMAN CASE FOR THE CONCEALED CARRIER

The Facts of the Zimmerman Case

The shooting of Trayvon Martin dominated headlines in 2012. It triggered a national debate about so-called “Stand-Your-Ground” laws, rekindled a long-smoldering conversation about racism in America, and sparked a conversation about guns and self-defense. At the center of the controversy was George Zimmerman, a 28-year-old man who encountered unarmed, 17-year-old Trayvon Martin on a dark, rainy February evening.

After a rash of burglaries within a gated community called The Retreat at Twin Lakes in Sanford, Florida, located just north of Orlando, Zimmerman had been instrumental in forming a neighborhood watch program. On any given evening, this captain of the watch program could be seen walking his dog around the small neighborhood, which consisted of just three interconnected roads.

Zimmerman was not on his official neighborhood watch, however, when he encountered Trayvon Martin on the night of February 26, 2012. Rather, he was leaving the neighborhood to do his weekly grocery shopping. From behind the wheel of his pickup truck, Zimmerman spotted Martin entering the neighborhood from between two townhomes on the perimeter road. He thought that Martin’s behavior was suspicious, especially considering the dark and rainy conditions, so he pulled into the parking lot of the community clubhouse to call the Sanford Police Department’s non-emergency line.

The recorded call reveals what happened next. At the dispatcher’s request, Zimmerman described Martin’s appearance and behavior, stating that Martin was black and acting strangely — “like he’s on drugs or something.” As Martin proceeded down the road, Zimmerman slowly followed him in his pickup truck. During that time, he made comments including the phrases, “f***ing punks” and “they always get away.”

Contrary to media reports, Zimmerman did end his pursuit at that time, and during the remainder of the phone call with the dispatcher, it became clear that Zimmerman had lost sight of Martin in the dark corridor between two rows of townhomes.

Approximately 90 seconds later, a 911 operator began recording a phone call from Jenna Lauer, the resident of a townhome near where Zimmerman had exited his vehicle. The recording picks up desperate screams that continue for about 45 seconds – screams that end abruptly after the distinct sound of a single gunshot.

While Jenna Lauer was on the phone with 911, her next-door neighbor, John Good, opened his backdoor and witnessed the altercation. In his testimony, Good said that a man in a red jacket, Zimmerman, lay prone on his back while being beaten by a man in a dark jacket, Martin. Evidence at trial further supported that Martin was the person on top during the altercation. Good yelled at the men to stop fighting and went back into his home before Zimmerman fired the fatal shot.

In recorded statements to police, Zimmerman claimed that after losing contact with Martin, the 17-year-old reappeared, and following a short verbal exchange, Martin punched Zimmerman in the nose and wrestled him to the ground. Zimmerman alleged that Martin mounted him, continued to punch him, and smashed his head into the sidewalk. In the struggle, according to Zimmerman, the bottom of his shirt rode up, revealing his concealed Kel-Tec 9, and that is when he pulled the pistol and fired the already chambered round.

Less than a minute after the shooting, Martin lay dead on the ground, and another neighbor, Jonathan Manalo, rushed outside and encountered Zimmerman. With his cellphone camera, Manalo photographed Zimmerman, documenting the injuries to his head. Moments later, the officer dispatched in response to Zimmerman’s original non-emergency call arrived on the scene and took Zimmerman into custody for questioning. While Zimmerman was in the back of the police cruiser, another photograph was taken that revealed injuries to Zimmerman’s nose and face.

Officers took Zimmerman to the police station and questioned him for approximately five hours. Zimmerman, without advice from a lawyer, cooperated fully and answered all of the detectives’ questions. Without any evidence to refute his self-defense claim, Sanford Police released Zimmerman without filing charges.

It would eventually be up to a jury to decide if George Zimmerman’s self-defense claims were true.

Coincidentally, Florida was the first state to adopt a “stand-your-ground” law in 2005. This type of law has also been referred to as a “line in the sand” and “no duty to retreat” law. It establishes the right of a person to defend him- or herself against threats or perceived threats, even to the extent of using lethal force, and regardless of whether safely backing away from the situation may have been possible.

Stand your ground laws, now adopted by an additional 24 states, commonly assert that an individual has no duty to retreat from any place where they have a lawful right to be (although this is interpreted differently among states). Furthermore, under a stand your ground law, it is permissible for the individual to use any level of force necessary, including lethal force, if they reasonably believe the extent of the threat may result in imminent and immediate serious bodily injury and/or death.

Stand your ground laws are a broader version of Castle Doctrine, a common law doctrine which gives people the right to use reasonable force, including lethal force, to defend themselves, their property or another, inside their residence. Castle Doctrine makes no provisions for self-defense outside the home.

Both stand your ground and castle doctrine laws are legally acceptable defenses in cases where individuals are being charged with criminal homicide. Regardless of this, even in states that have stand your ground laws, there are restrictions applicable to use of force in self-defense situations. Issues requiring definition may include the objective reasonableness of the threat of perceived harm, or whether the force used in self-defense is appropriate to the extent of the threat. Questions of who was the initial aggressor can also play a role in deciding the legitimacy of self-defensive action.

Further Analysis of the Zimmerman Case

In this series, we will look at the facts of the Zimmerman case, explore how they affected the prosecution of George Zimmerman, and identify lessons from the case that will help those who choose to carry a weapon make more informed and responsible decisions should they ever find themselves in a self-defense scenario.

EDITORS NOTE: NOT ALL THE VIEWS IN THIS ARTICLE REFLECT THE VIEWS OF CCW SAFE.