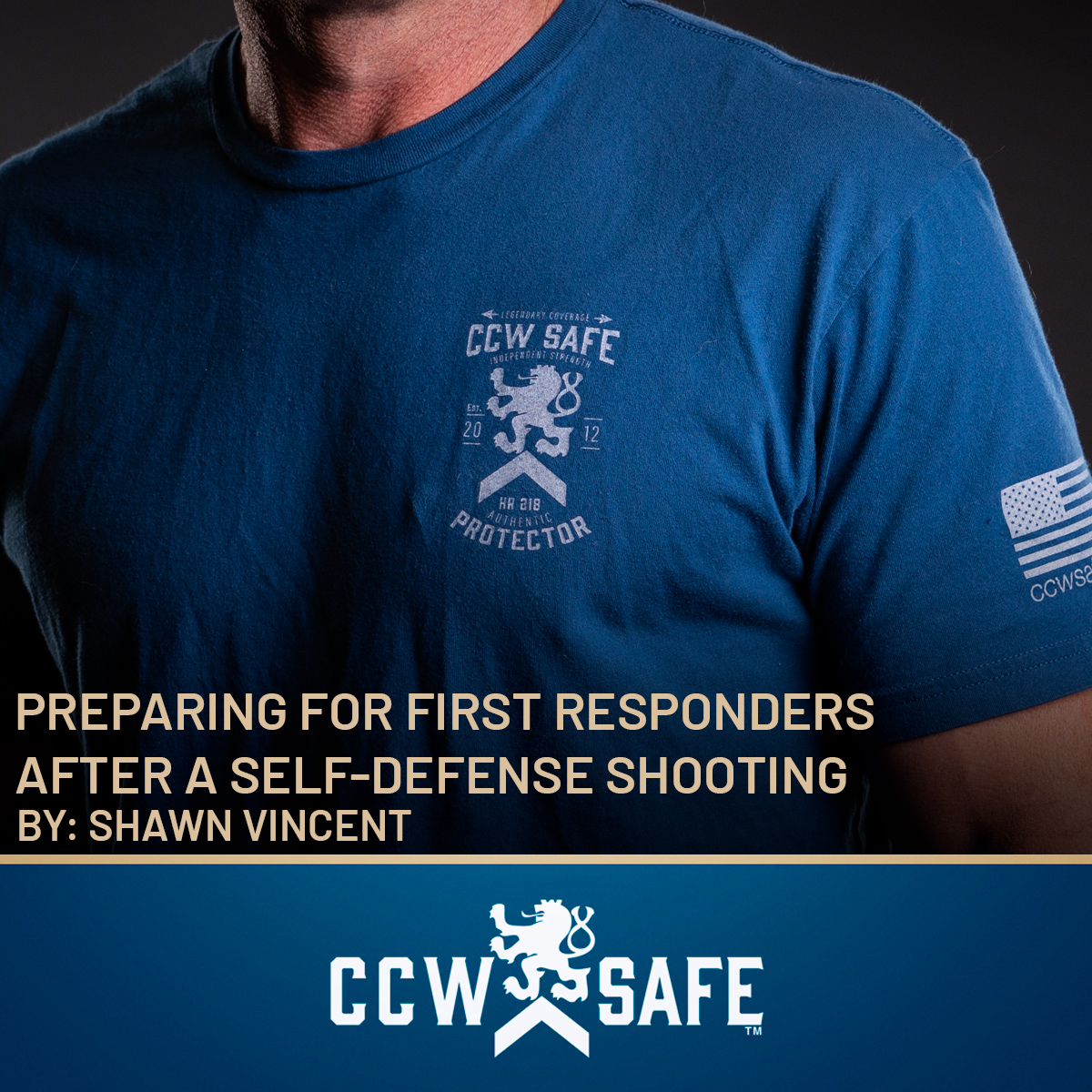 Posted on September 30, 2022 by Justin Collett in Shawn Vincent

Preparing for First Responders After a Self-Defense Shooting

Steve Moses says, “The first thing I’m going to do is anything that reduces the perception that I might be the bad guy.” Steve is a firearms instructor and he was a member of a tactical squad that served high-risk warrants, so he understands how cops feel when encountering a person of interest who is likely to be armed. As an armed defender in the wake of a self-defense shooting, “one of the best things you can do is to hoster your handgun,” Steve says.  For your own safety, you don’t want to have a pistol in your hand when the police arrive. Steve acknowledges that it’s possible the attacker may still remain a threat, and if that is the case, a defender can move to a nearby place that is safer, or if that’s not possible, keep the firearm holstered but ready to draw if circumstances change.

If you are the one who initiated the 9-1-1 call, the dispatcher will likely try to keep you on the line until first responders arrive. If it is safe to do so, it is usually a good idea to stay connected. The operator will be in a position to communicate, either directly or indirectly, with responding officers, and they can be a critical part of ensuring a smooth encounter.

We’ve written extensively about the Zach Peters case, where the 21-year-old Oklahoman shot three intruders who broke into his home before he barricaded himself in his bedroom and called 9-1-1. Peters stayed on the phone with the 9-1-1 operator, and his recorded conversation is public record. After an initial exchange and a long silence, Peters says, “I’m still armed in the southeast corner of my house.” The operator states that a deputy is on the scene and says, “I need you to go ahead and unarm yourself and put the gun away.” Peters says, “Okay, it will be unloaded on my bed, and I’ll still be in my bedroom.” Peters had a smooth first encounter with responding officers, and he faced no charges for the shooting.

Steve Moses says that when you meet the responding officers, you’ll want to identify yourself and make sure they can see your hands. Steve says, “I want to bring my hands up to face level, palms out, and say something like ‘Hey guys, I’m the one who called.’” Don’t make any sudden moves, and ask the officers for instructions. Demonstrating that you’re concerned about the officers’ safety can go a long way toward showing the police that you’re not the bad guy.

Notwithstanding, an armed defender should anticipate that they may be treated like a criminal suspect — at least at first. Don West is a criminal defense attorney and National Trial Counsel for CCW Safe. Don says that a fatal self-defense shooting, justified or not, is a homicide, and as an armed defender making a self-defense claim, you’ll be the sole suspect in a criminal homicide investigation. “You’re likely to be handcuffed,” Don says, “and you’re likely to spend a considerable amount of time in the patrol car while the responding officers sort things out to help identify witnesses and get a general sense of what happened.”

It may be an insult to injury to suffer the indignity of being cuffed in a patrol car after a life and death confrontation with an attacker, but it is in your best interests to be polite and cooperative. “As soon as people start showing up from the 9-1-1 call onward, you’re the center of attention,” Don says. “What you do and how you do it, what you say and how you say it, how you hold yourself out — it will all factor into the assessment of the case and ultimately into the credibility of your self-defense claim.”

Of course, we all know from television that “anything you say can and will be used against you in a court of law,” and armed defenders are well-advised not to say too much about the details of a self-defense without legal counsel. That said, it’s also important to state your self-defense claim, and provide officers with details that will help them gather evidence that is likely to support your claim. Don West says understanding what to say and what not to say is a delicate balance, akin to “square dancing in a minefield.”

Next week we’ll dive deeper into how to navigate that minefield. For now, the lesson for concealed carriers is that after you make sure you are safe and call 9-1-1, your next priority is to have a smooth first encounter with responding law enforcement officers. Make sure the officers can see your hands. Identify yourself and ask for instructions. Remain polite and cooperative — even if you are treated like a criminal, and even if you are arrested. There will be time to mount your legal defense later, and how you interact with law enforcement officers in aftermath of a self-defense shooting can have a significant impact on a criminal investigation.